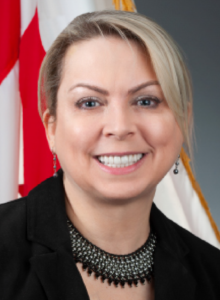 Before being appointed CIO, Tammy was Assistant Deputy Minister of the Integrated Services Branch where she led several government programs and initiatives, such as, MyGCHR, GCSurplus, Seized Property Management, the Canadian General Standards Board, as well as the PSPC Client Service Strategy.

Tammy has extensive experience in developing and implementing large-scale business programs, computer applications and infrastructure systems. She joined the department in February 2014 as Director General of MyGCHR, where she led the successful implementation of MyGCHR, a new human resources system, across the federal government.

Additionally, Tammy was appointed by the President of the Treasury Board to the Board of Directors of the Federal Public Service Health Care Plan Administration Authority, effective June 2016.

Tammy has a master’s degree in business administration from the University of Ottawa and is a certified information technology project management professional.